by Chris Horymski
in Industry Opinions
0

A clear majority of Americans currently in credit card debt are stressed about their financial predicament, no matter how they accumulated the debt in the first place, according to a new survey from Comparecards.com.

As for how cardholders accumulated the credit card debt in the first place, often it’s not from a particular expense like a wedding or costly vacation. Paying for basic needs was the reason most often reported. Some 42 percent of respondents said that “making ends meet each month” was how they got into credit card debt. 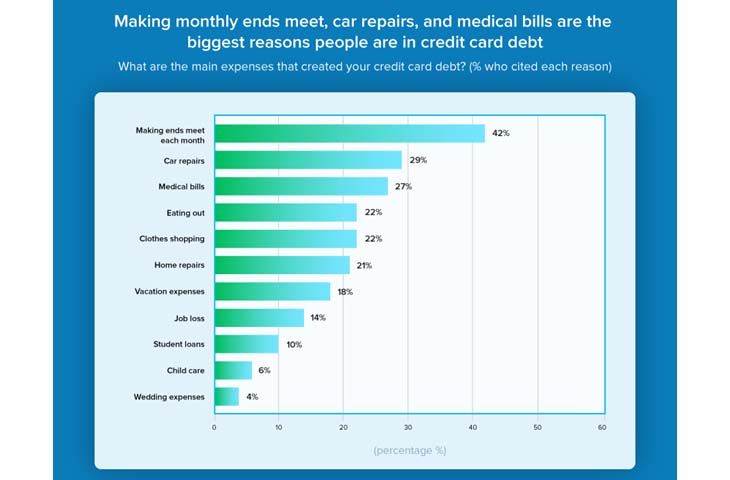 When this is the case, many financial experts suggest putting a number on one’s monthly expenses. The simple exercise of summing up their monthly expenses can help credit card users prioritize what’s essential and eliminate spending that isn’t.

Among millennials, eating out was also a primary driver of credit card debt. Nearly one-third (31 percent) of millennials reported that eating out contributed to their carrying of a credit card balance, versus only 22 percent of the population as a whole.

Boomers with credit card debt have their own set of challenges. According to the survey, they’re more likely to have debt from unexpected expenses like car repairs, which often take more time to pay off.

Nearly half of baby boomers claim that their credit card debt will take more than one year to pay off, versus 28 percent of millennials. Although the survey doesn’t point to any clear reasons, the disparity could possibly be attributed to differences in credit card balances between the two cohorts. Generally, younger borrowers with newer credit histories will have lower credit limits than older borrowers, which means they might not be able to rack up as much debt as older borrowers.

Too stressed to be blessed 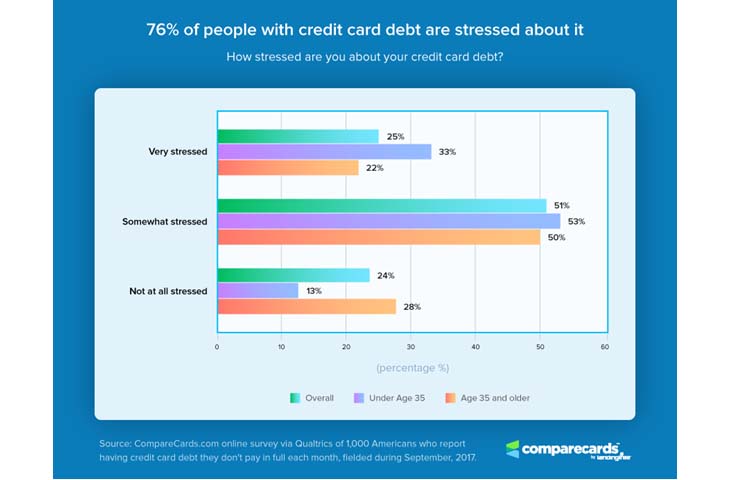 But no matter how credit card users accrued the debt, most borrowers find the burden of credit card debt stressful, although older borrowers appear to be slightly more relaxed than millennials. The vast majority (87 percent) of millennials say they are either “somewhat stressed” or “very stressed” about their balances, compared to 72 percent of borrowers aged 35 and older. 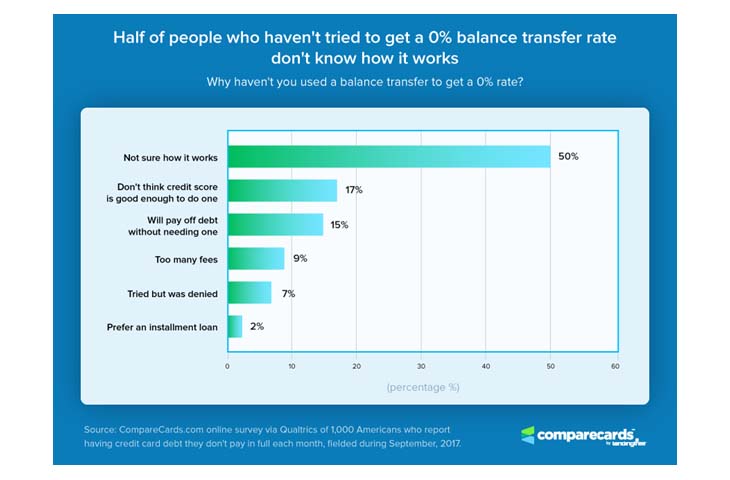 Despite not knowing how balance transfers worked, most of those surveyed (73 percent) claimed they had a plan to pay of their debt.

Balance transfer cards can help those with credit card balances lower their monthly payments by moving higher-interest debt to the new card with an introductory period during which no interest accumulates.  Some cards will give users a year or more of 0% interest on those balances, which gives them time to pay off the balance without piling up additional interest.