Despite many similarities between men and women when it comes to running a business, differences do exist. This year, Mercator took a look at some of the attitudes and concerns of women and men to understand some of these differences. Following PaymentJournal’s podcast with Ginger Siegel on Mastercard’s approach to small business owners, we took another look into what our own data says about how small business founders think about and run their businesses.

Every year Mercator Advisory Group examines the U.S. small business payments and banking market.  We conduct an annual survey of decision-makers from 2,000 small businesses with annual revenues of $100,000 to $10 million. As part of our analyses, we compared male and female small business owners on their personal outlook for their company’s future, cash flow issues, attitudes towards technology and major funding sources. The responses revealed interesting differences between how men and women think about and run businesses.

Female business founders seem to be less worried about certain aspects of their companies’ payment processes than their male counterparts. For example, while 41% of female founders admitted to worrying about their business’s cash flow, an even higher 46% of male founders felt the same way— despite the fact that 97.8% of venture funding goes to male founders. On top of that, 41% of male owners worry about their ability to match receipts with payments due, while only 32% of female owners said the same. Similarly, 41% of male owners agreed that their company doesn’t pay enough attention to its payments processes of technology, compared to 31% of women.

On top of that, a greater percentage of male business owners found technology to be too expensive and view it as a headache compared to women. Despite all of this, 52% of male owners considered themselves on the “cutting-edge” of technology, while only 41% of female founders said the same.

In terms of the primary resource used to help run their businesses, banks came out on top, with 30% of men and 22% of women relying on them most. Nearly the same percentage of women relied on accountants as banks, at 21%, while that number was cut almost in half for men, at 16%.

While banks, accountants and financial advisors ranked first through third, respectively, for both genders, differences became prominent after that point. The next most commonly reported primary resource for men were technology advisors at 9%, while family and friends took fourth for women founders at 8%.  Men were also more likely to take advice from other small business owners and use internet recommendations as a primary way of helping to run their businesses

In summary, the way men and women look at their business, in many ways, is different.  Some of these differences are more subtle and some more marked than others.  That said, companies looking to work with small businesses should take note of these differences to better calibrate their approach. 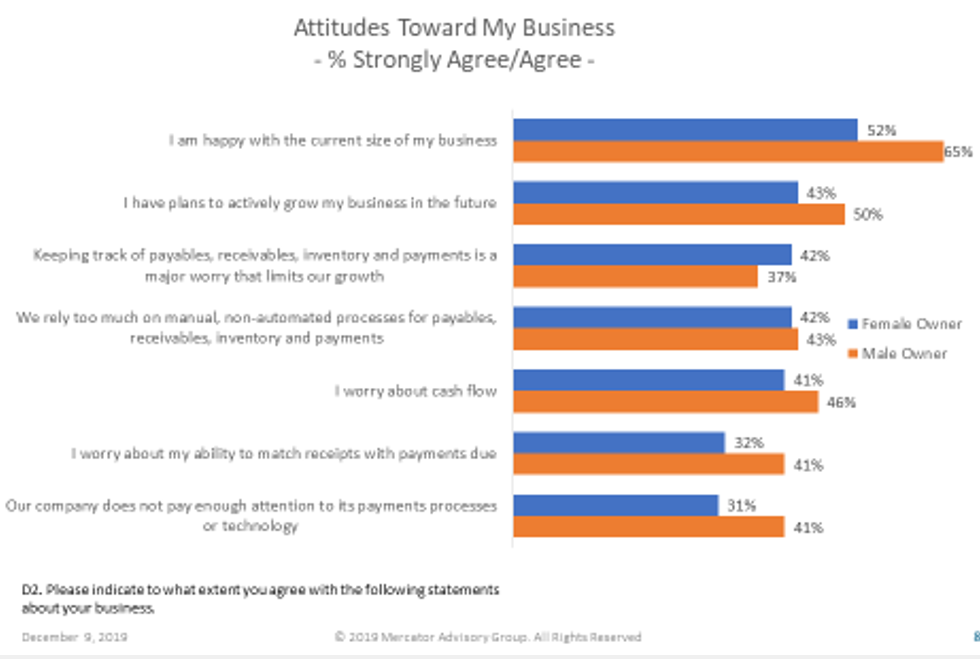 Article Name
How Male and Female Small Business Owners Differ in Running Their Businesses
Description
Despite many similarities between men and women when it comes to running a business, differences do exist. This year, Mercator took a look at some of the attitudes and concerns of women and men to understand some of these differences.
Author
Peter Reville
Publisher Name
PaymentsJournal
Publisher Logo