The private wealth management industry had a very good year in 2017, as 25 global leading players increased their assets under management (AUM) by nearly 14%, according to the latest research by GlobalData, a leading data and analytics company and Private Banker International. This is a significant improvement over 2016, when the annual growth was just over 5%.

UBS held number one position in the ‘2017 Global Private Wealth Managers AUM Ranking’, followed by Bank of America Merrill Lynch and Morgan Stanley. Credit Suisse and J.P. Morgan complete the top five, as all the largest players recorded double digit growth. The ranking will be officially presented at the Private Banking & Wealth Management: London 2018 Conference and Awards on 7th June 2018. 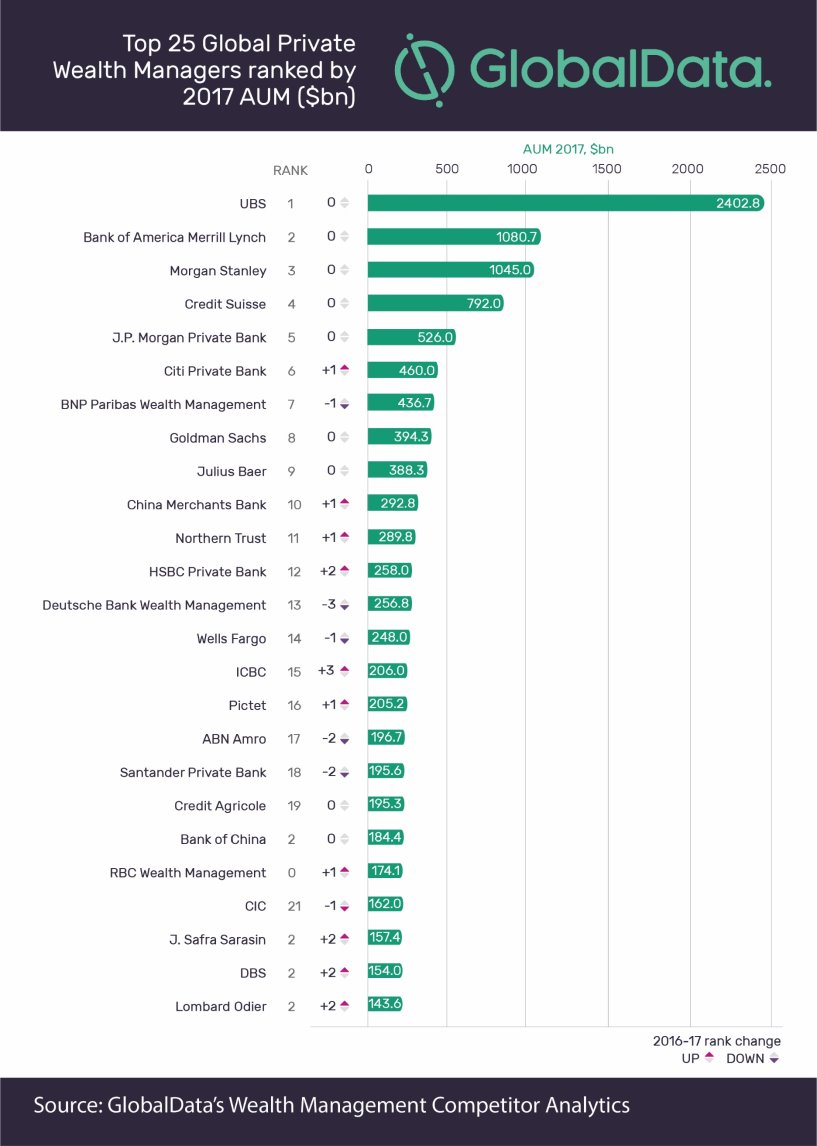 Bartosz Golba, Head of Wealth Management Content at GlobalData, commented, “On average, the top five competitors increased their assets in 2017 faster than the rest of the players included in the ranking. This is a significant improvement on their 2016 performance, which proved to be a difficult year for the leaders. Now they are back on the right track, widening the gap between them and the chasing pack, headed by Citi Private Bank.”

Although the average growth in the lower parts of the ranking might be lower, it is there where competition is the fiercest. The most notable move is China Merchants Bank breaking into the global top 10 for the first time.

Andrew Haslip, Head of Financial Content for Asia Pacific at GlobalData, continues, “Almost all international private wealth managers have a focus on developing their presence in Asia Pacific where the market is growing. But it is not an easy market to thrive in with plenty of competition from local players. The six Asia Pacific-based banks we track – Bank of China, China Merchants Bank, DBS, ICBC, OCBC, and Standard Chartered – are hungry for growth and expanded their AUM by 17.4% in 2017, almost 3.5 percentage points higher than the rest of the top wealth managers. A lot of this growth is organic and the result of greater wealth across the Asia Pacific region as well as increased uptake of professional management by the high net worth individuals of Asia.”

Despite focus on organic expansion, the region has seen some M&A activity, particularly from Singaporean private banks. DBS and OCBC both closed opportunistic acquisitions from retreating Australian banks in 2017 that boosted their AUM, although the latter remains outside the top 25.

Golba explains, “Nimble banking groups in the region can use this feature of the market to grow their AUM, something that favors the Singaporean banks in further acquisitions once the economic and financial market cycle turns. However, acquisitions are not a straightforward way to grow a company’s assets base. As an example, EFG International, which was able to boost its AUM in 2016 thanks to the acquisition of BSI became the worst performing of all the players we track in 2017. Along with Deutsche Bank and ABN Amro, it was the only one to report a negative change in AUM in 2017.’’

How to Implement Effective and Innovative Cross-Border Payment Strategies