Nacha, which advances payments and financial services through ACH rules, business tools, education, and interoperability standards, has recently experienced a change in leadership. Jane E. Larimer took over as president and CEO on July 1, a move Nacha had announced during its Smarter. Faster. PAYMENTS 2019 event back in May.

Larimer had previously served as Nacha’s chief operating officer and general counsel, and has been involved with the organization for the past 23 years. She replaced Janet O. Estep, who had served as CEO for the past 11 years. Estep is now Nacha’s President Emeritus. She will retire at the end of the year.

A look forward: “Collaboration for innovation is in Nacha’s DNA”

Larimer’s vision for Nacha’s future is informed by her vast past experience with the organization.

“I’ve been at Nacha for the past 20 years,” said Larimer. “One of the first things I learned when I came here was that we want to find places where we can innovate and change, and make things better for the industry.”

Therefore, Larimer’s vision for Nacha is not a departure from previous goals – instead, it is a continuation.

“From electronic benefits transfer to the ACH Network, I’ve invested the bulk of my career at Nacha in the advancement of many different initiatives that bring stakeholders together to solve payment industry needs,” said Larimer.

The future will be no different. “My top priorities include growing the ACH Network, making Same Day ACH even more valuable by adding a later day window, and making it easier for businesses to onboard vendors and route payments using Nacha’s Business Payments Federated Directory,” said Larimer.

All of these changes and initiatives are a product of collaborating with and listening to industry stakeholders – two tasks central to Nacha’s mission. Nacha looks for issues where there is an industrywide desire to work together and then takes the lead in making the necessary changes.

“As we look at our vision and out into the future,” described Larimer, “collaboration for innovation will remain core to Nacha’s DNA.”

It comes as no surprise that Larimer is focused on Same Day ACH. It has been widely successful since Nacha rolled it out in 2016. With nearly 178 million transactions last year, Same Day ACH has seen its volume grow by 137% since 2017.

By adding a third processing window every business day for Same Day ACH, Nacha seeks to keep the momentum going. All of Nacha’s members approved the change and the industry expressed their support as well.

The third window would come at 4:45 p.m. ET, two hours later than the current deadline. This change allows for companies operating on the West Coast to utilize the network for faster payments. The change will go into effect March 2021.

Another change Larimer mentioned was that beginning in March 2020, the dollar limit for Same Day ACH transactions will quadruple to $100,000. This change is expected to be very popular. Increasing the limit was the most common request from corporates, according to Michael Herd, senior vice president of ACH Network Administration at Nacha.

The last project mentioned by Larimer, the Business Payments Federated Directory, will also create a better experience for members of the payments industry. Through the directory, businesses can obtain, maintain and exchange accurate and compliant payment information. The database leverages blockchain technology and improves the end-to-end electronic payment and remittance process for businesses-to-business payments.

Larimer on the future of payments

“It’s all about choices,” said Larimer. “Whether it’s ACH, Same Day ACH, instant payments or other new methods, I think the future will allow for more choices. And more choices are a good thing.”

She added that there is a misconception that new payments methods cause the old ones to go away. Instead of it being a zero-sum game, Larimer sees various payment options coexisting, allowing consumers to pick and choose what they want to use.

“Cash and checks are an example of this,” she said. “While we continue to see fewer checks, they didn’t just instantly disappear when new payment methods emerged.”

For its part, the ACH Network is on pace to continue to factor prominently in the future of payments. 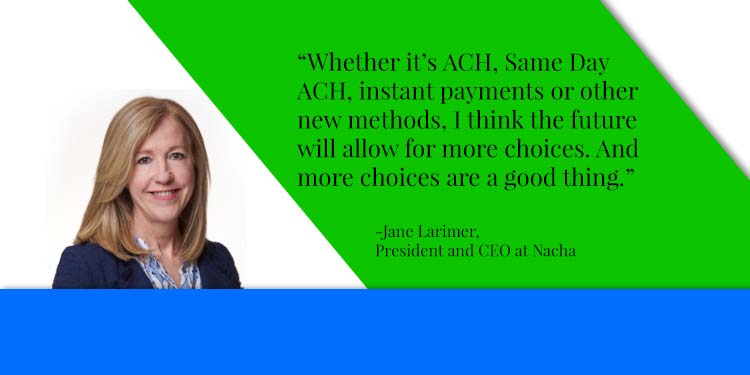