To understand the reasoning behind this move and what other innovations Nacha has planned, PaymentsJournal sat down with Michael Herd, senior vice president of ACH Network Administration at Nacha, and Sarah Grotta, director of Debit and Alternative Products Advisory Service at Mercator Advisory Group.

During the conversation, Herd and Grotta also discussed the state of the ACH Network, the use cases the new rule change will enable, and the areas where Nacha plans to spark innovation going forward.

The tremendous growth of the ACH Network

No matter how you assess the numbers related to the ACH Network’s payment volume and value, one thing is clear: The ACH Network is rapidly growing. Overall, the volume of payments humming along the Network increased by 7.7% from 2018 to 2019. In addition, $55.8 trillion transacted across the ACH Network, an 8.9% increase in value from 2018.

“Same Day ACH volume in 2019 saw over a million transactions processed per day and a billion dollars in value every day,” explained Grotta. “These are pretty interesting statistics.”

She attributed such impressive growth to the fact that businesses can send and receive Same Day ACH payments without having to retool their back offices or create new procedures, “since it works very similarly to standard ACH.”

Grotta also noted that although Same Day ACH may be considered a premium product, and is thus priced a little higher by financial institutions, use of the ACH rails is still economical and efficient when compared to similar faster payments types. The last reason she identified for Same Day ACH’s increased use is that the faster payment option has many use cases.

Why is Nacha increasing the per-transaction dollar limit?

If the ACH Network is growing at a healthy rate, it may come as a surprise that Nacha is changing its rules. Even more surprising, the current dollar limit covers roughly 98% of the transactions moving along the ACH rails.

However, the reason for the change is simple. “We listened to what the users of the ACH system were asking for,” explained Herd, “and the increase in the dollar limit for Same Day ACH transactions was number one on their list.”

Nacha came to this determination after attending numerous forums and conferences where Nacha officials would solicit feedback from ACH users. Since so many corporates, businesses, and other end users routinely requested a higher per-transaction limit for Same Day ACH payments, Nacha decided an increase was appropriate.

The use cases for Same Day ACH

Herd noted that once the change goes into effect on March 20, there will be specific use cases that “will be greatly enhanced by having a higher dollar limit. For example, B2B payments will be improved by the move.

“B2B is the area where we have the greatest volume of outstanding payments on the ACH Network that are above $25,000,” explained Herd.

Now with the limit going up to $100,000, Herd expects that more B2B payments will make use of Same Day ACH capabilities, compounding a trend that was quite evident in 2019 as Same Day ACH B2B payments increased by 45%.

He also pointed out that insurance claim payments and other types of disaster assistance payments can now move along as a Same Day ACH faster payment. Many of these payments total over $25,000 because they are often covering the value of people’s cars, homes, and other valuable assets.

Another use case is for small businesses and merchants to secure quicker funding, “particularly for items like their payment card transactions or even short-term lending arrangements,” said Herd. Raising the dollar limit helps these entities quickly secure up to $100,000 at a time.

What other rule changes are on the horizon?

Next year on March 19, Nacha plans to make another announced rule change official. Nacha will expand its hours for Same Day ACH by two hours a day, every banking day that Same Day ACH is available.

“That’s another area where, quite simply, we’re just listening to what the market is asking for: The ability to transact Same Day ACH payments later into the day,” said Herd. Such a move aids businesses further west, including in the center of the country and the coast.

As Herd put it: “Providing extra hours in the day will enable a lot of those institutions and their customers to take much greater advantage Same Day ACH.”

In addition to expanding the operating hours, Nacha is currently working to understand how businesses and consumers are interacting with and using new technologies to initiate commerce. As more people make payments using their personal voice assistants, such as Alexa and Siri, Nacha wants to learn how to better accommodate these use cases.

“We want those that want to use the ACH Network for these kinds of conversational commerce transactions to be able to do so and to understand how the Nacha rules apply to them and those transactions,” explained Herd.

This is only one of a set of rules proposals and other concepts collectively referred to as Meaningful Modernization. The overarching purpose of the proposals to help reduce barriers to use of the ACH; provide flexibility and increasing consistency related to the authorization of consumer ACH payments; and reducing certain administrative burdens. Nacha is requesting industry feedback by May 1. Whether it’s through increasing its per-transaction dollar limit or expanding operating hours, Nacha is working to ensure that more business and consumers can take advantage of Same Day ACH and the benefits that come with faster payments. 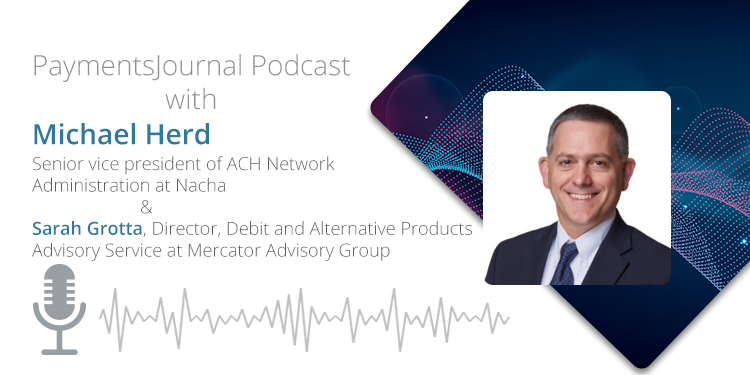