APIs Are the Future of Banking

APIs Are the Future of Banking

In recent years, digital experiences have become a prominent aspect of the payments industry. From making mobile payments to tracking their finance, consumers increasingly want the ability to seamlessly conduct a range of financial activity online. And with COVID-19 forcing people to limit physical interactions, the centrality of the internet to daily life is only increasing.

In order to provide the digital functionality that consumers have come to expect, financial institutions are often relying on application programming interfaces—commonly known as APIs. An API is a list of programming instructions that allows a software application to directly communicate with another, enabling the software to perform a variety of tasks. In fact, almost all online activity relies on APIs in some capacity, not just financial activity. According to one estimate, API calls make up 83% of all web traffic.

But not all APIs are created equal; the type of connections APIs use to communicate the relevant information can greatly impact security and user experience. Specifically, there are important differences between APIs that communicate over the public internet and those that communicate across private networks. As APIs become a more integral part of the payments industry, understanding these differences becomes more important.

To learn about the future of APIs in the payments industry and the difference between private and public connections, PaymentsJournal sat down with Lance Homer, Banking & Payments Ecosystem Director at Equinix, and Tim Sloane, VP, Payments Innovation at Mercator Advisory Group.

The API market is huge—and growing

The first thing to know about APIs is that it “is a huge market,” said Sloane. “They’re being implemented across many different technology platforms.” He estimated that APIs in the payments industry will “see a growth rate of around 20% over the next four years.”

Homer agreed, adding that, as the graphic below illustrates, “There is going to be dramatic growth in API connectivity across the payments and banking space in the next few years.” While the growth of APIs is commonly associated with open banking, it should more be understood within the context of what Homer called “connected banking.”

“It’s not just about opening up your platform to fintechs,” explained Homer. Though that is important, using APIs in connected banking is also about “making sure that you can connect to your internal users and create a DevOps community.”

Since banks move vast sums of money between people, store sensitive information, and conduct complex financial activity, all in the blink of an eye, the strength and quality of connections has always been important. Poor connections can delay the transmission of the data in what is known as latency, a problem that has long been causing headaches for financial institutions.

Sloane shared a story of a one financial institution that had its MQ Series Middleware almost brought to its knees because of an influx of traffic. “As you start to connect not through middleware like that, but through the internet to multiple different partners, being able to manage the bandwidth, and more importantly, the latency is really critical,” he said.

For Homer, this underscores the need for ensuring APIs use the right types of connections. “Where and how you connect really is going to make all the difference in how you deliver your APIs out to the ecosystem,” he explained.

The importance of where connections occur

When using digital services, many forget that the underlying connections enabling the digital experience exist in a physical location; it seems out of sight and therefore unimportant. However, the actual location of where the data is being transmitted and stored is important because of latency, regulatory, and security concerns.

Homer explained that to avoid latency issues, it’s best to “have your partners connect directly to [your API] at the availability zone that’s closest to them. And that may require you to have a Point of Presence…where you can accept API requests from those in that local zone.”

Where the connections occur also matter because different geographies have different regulatory requirements governing data exchange and storage. Europe, for example, has much stricter regulations than America.

“All of this comes back to the how your customers and partners are accessing your APIs and where that data is stored,” said Homer.

The importance of how connections are formed: Private versus public connections

As more financial services migrate to online channels, the importance of whether these connections are formed over private or public networks is growing. APIs that communicate over the public internet are subject to potential latency issues that are largely outside of the financial institutions control. Further, public network connections come with potential security risks. As Homer put it, “everybody and their dog can access” the connection over a public network, opening up the companies to security risks.

In contrast, private networks allow for the company to control the latency between endpoints, while offering markedly more secure connections. This is because with private network connectivity, a company can control who has access to the network and when.

Want to learn more about making better connections for better innovation? Register for the up coming webinar.

Instead of having to build out the necessary infrastructure themselves, companies can now pay on an as-needed basis to access already-built infrastructure. For example, Equinix created the Equinix Cloud Exchange Fabric, which “allows any of our 10,000 customers to quickly turn up private connectivity between themselves and then pay for it on a per day basis,” explained Homer, adding that they also pay based on the amount of bandwidth they need.

This is tremendously helpful for companies that experience a surge of traffic during certain parts of the year, as is the case for many retailers during the holiday season.

Having affordable access to reliable, private connectivity will help software developers create the digital financial service solutions of tomorrow. And by being able to scale the network connections as the service grows, companies can keep innovating well into the future.

“It’s a great time if you’re a developer and you’ve got a great idea,” concluded Homer. “You can launch in the cloud, and then scale with Equinix, being able to deploy in different markets around the world. And we’ll help you with making sure that latency, security, and connectivity are all thought out up front.” 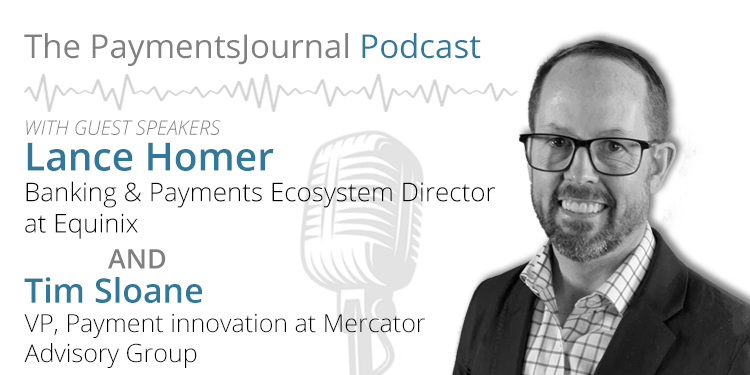 Article Name
APIs Are the Future of Banking
Description
In order to provide the digital functionality that consumers have come to expect, financial institutions are often relying on application programming interfaces—commonly known as APIs. An API is a list of programming instructions that allows a software application to directly communicate with another, enabling the software to perform a variety of tasks. In fact, almost all online activity relies on APIs in some capacity, not just financial activity. According to one estimate, API calls make up 83% of all web traffic.
Author
PaymentsJournal
Publisher Name
PaymentsJournal
Publisher Logo