Today, technology has made goods and services across the world available to almost anyone with a few mouse clicks. No longer are shoppers restricted to their local stores and shops for things they need. The jump to e-commerce shopping has long been growing, and shows no signs of slowing down. The holiday season is upon us, and for many that involves ramping up our purchases and getting our holiday shopping underway. But now with so many shopping options, knowing where consumer habits are trending is more important than ever.

Black Friday has always been a shopping staple here in the United States, but its adaptation across the world has been slow. This is not surprising since the shopping day is centered around Thanksgiving, which is practically a non-existent holiday for countries outside the states. However, it does seem the rest of the world is starting to catch on. This year Germans are expected to spend $239 million and Britons $399 million on Black Friday to take advantage of the pre-Christmas deals [1]. These numbers are big, but big compared to what? 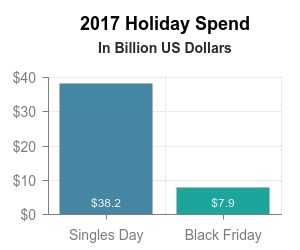 called 11/11), a Chinese shopping day done exclusively online. Single’s Day is celebrated on November 11th and is almost five times as big as Black Friday in terms of sales. On this day retailers earned a boastful $38.2 billion in 2017, compared to Black Friday’s earnings of $7.9 billion. Due to the events growth and popularity they expanded to two full days in 2018. So far, the numbers coming in from 2018 are record breaking, consumers spent a massive $31 billion in just the first day. While the event started in China, its adaptation among other countries has taken off incredibly fast. Last year, Singaporean e-commerce revenue on Singles Day increased by 74% [2]. Sales in Vietnam increased by 238% [3].  Across Southeast Asia as a whole, sales volumes rose in 2017 by 191% [4].

PPRO recently released a report, Is U.S. E-commerce ready to take on the world, that highlights the fact 85 percent of the world’s purchasing power falls outside of the United States. This can be seen when comparing Black Friday and Single’s Day in terms of both sales and expenditure. This amount of spending should prompt U.S. online retailers and merchants to consider the consumer behaviors of people cross-border. The report also highlights that consumers no longer feel confined in their shopping. In the United States 34 percent of consumers shop with e-commerce merchants based in other countries, that number in the UK is 38 percent, France 40 percent and Germany 32 percent.

With the global marketplace jumping on board with Black Friday, and also throwing in a day of their own, why aren’t more U.S. online retailers and merchants selling globally? The PPRO report starkly points out that only 36 percent of U.S. online merchants are actually selling cross-border. For comparison, cross-border makes up 11 percent of total U.S. e-commerce revenue, in Europe that figure is 16 percent and in China nearly double at 20 percent. The numbers are shockingly low when data shows that cross-border e-commerce in the U.S. is expected to reach $202.6 billion by 2021.

To capitalize on events like Single’s Day, and the purchasing power outside of the U.S., considerations need to be made, taking into account that cultural differences heavily influence shopping habits. Security and payment preferences are a few principle factors and a good place for online retailers to start.  Local payment methods (LPMs, sometimes referred to as APMs, alternative payment methods), are those means of payment outside of traditional credit card. LPMs facilitate the needs of different geographies, cultures and domestic economies across the globe. They tend to be market and geographically specific, and are many times preferred by the majority in specific regions, for instance in China 49 percent of online payments are made by E-wallet, while 70 percent of online purchases in Ukraine are handled with cash. Knowing your audience and adapting will help drive sales and increase revenue, tapping into cross-border opportunities.

[FOOTNOTES]
1. Sarah Feldman. “Where Will Consumers Spend the Most on Black Friday?”, 20 November 2018, Statista.

Article Name
Holiday Shopping; Black Friday, Single’s Day and Everything In-between
Description
The holiday season is upon us, and for many that involves ramping up our purchases and getting our holiday shopping underway. But now with so many shopping options, knowing where consumer habits are trending is more important than ever.
Author
Steve Villegas
Publisher Name
PaymentsJournal
Publisher Logo