In late March, with COVID-19 spreading rapidly and the economy coming to a grinding halt, Congress passed the CARES Act. As part of this enormous piece of legislation, the government sent nearly 160 million payments to Americans to help them weather the impending economic disaster. By the end of August, the government had distributed $270 billion in funds for these stimulus payments.

However, the process had several challenges. The government struggled to reach those eligible who had not filed taxes—as of September, an estimated 9 million people have not received their payment. Some payments were made to deceased people, while other payments accidently went to foreigners living overseas. Even a small number of those who eventually received funds had to wait months before the funds reached them.

To understand how the ACH Network delivered stimulus payments on time, PaymentsJournal Editor-in-Chief Ryan McEndarfer sat down with Jane Larimer, President and CEO of Nacha, the organization that oversees ACH.

Direct Deposit worked as it should

Larimer explained that it took a couple of weeks for the IRS to determine who was eligible based on income requirements stipulated by the CARES Act. To make electronic payments, the IRS also had to determine whether people had deposit account information on file. For those who were eligible and had account information on file, the IRS made Direct Deposit payments using the ACH Network (as all Direct Deposits do).

This extended verification process makes sense given how much money the government was about to discharge to people. “The government is not going to issue funds without knowing the individual on the other end,” noted McEndarfer.Once these payments were made, the ACH Network worked as expected, delivering an unprecedented 81 million stimulus payments on a single day. Crucially, this is exactly what the IRS had instructed.

“The IRS said that payday for Direct Deposit was to be April 15. And on the morning of April 15, citizens woke up and found the money available for their use, just as intended and as instructed by the IRS,” said Larimer.

Instant payments would not have provided funds faster

Since the payments were scheduled for April 15, an instant payments system would have delivered them on April 15, not sooner. This means even if the IRS had decided to disperse payments through an instant rail, the outcome for providing funds would have been exactly the same. As McEndarfer succinctly put it, “payday is payday.”

Further, the use of instant payments would not have addressed the other problems surrounding eligibility determination and the dispersal of stimulus funds. Consider all the funds that went to deceased people.

“The real-time payment systems operate, in some ways, the same way the ACH Network does in that they will not know before making that payment whether that person is deceased or not; that’s not an attribute of the system,” explained Larimer. McEndarfer agreed, noting that the type of information needed to make a payment through the ACH Network and any real-time alternative is relatively the same.

This is not to say America should not invest in real-time rails. Larimer explained that Nacha favors payment choice and believes payers should choose payment methods that best suit their unique needs. For its part, Nacha offers Same Day ACH, a service that enables payments to be posted and settled on the same day (regular ACH generally posts and settles on the next business day). Those who need to make payments even faster should have the ability to do so, said Larimer.

“The industrial strength of the ACH Network”

The criticism that the speed of the ACH Network slowed down stimulus payments, misguided as it is, misses the fact that the rail performed extraordinarily well. In a single day, the ACH Network supported 81 million payments without issue, in addition to its regular payment volumes.

On any given day, in fact, the ACH Network averages 100 million transactions. “That’s what we call the industrial strength of the ACH Network,” said Larimer. 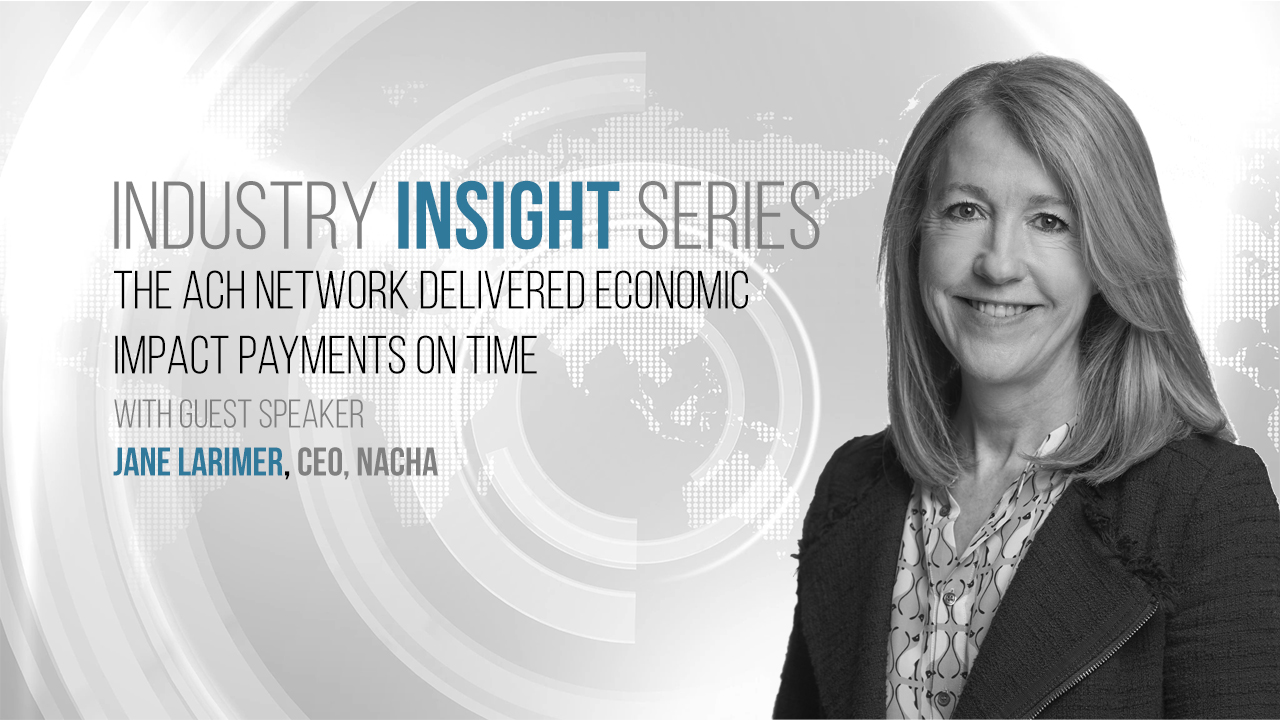 In late March, with COVID-19 spreading rapidly and the economy coming to a grinding halt, Congress passed the CARES Act. As part of this enormous piece of legislation, the government sent nearly 160 million payments to Americans to help them weather the impending economic disaster. By the end of August, the government had distributed $270 billion in funds for these stimulus payments.

COVID-19 & Consumer Banking: The Digital Transformation of the Branch